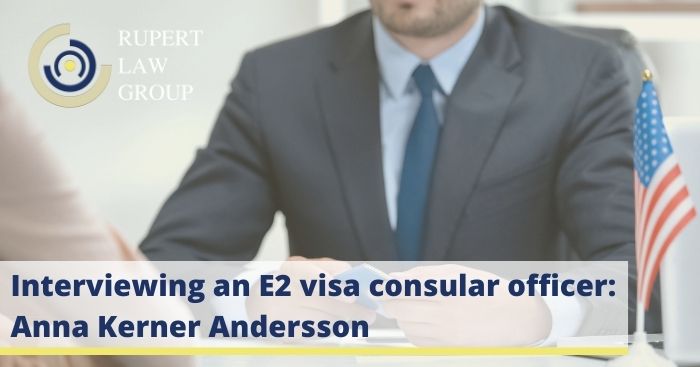 Angie Rupert: Going back to something that you and I talked about before this call, was something that clients do sometimes or applicants do, I guess, that is very annoying to the officers and that is when you ask a question, they say “it’s in the application just read it.” Bad answer, obviously. Could you elaborate a little bit on that and also anything that’s just… one of those things that just right off you’re going to set the officer in kind-of a not super happy mood.

Anna Kerner Andersson: Yeah, that’s a huge thing, right? Because the officer, again, it goes back to “does it make sense”? So, if you’re supposed to be this person that’s going to manage this successful business, if you can’t even articulate what’s in the business plan or the numbers or what your future plans are for growing and establishing the business, how is the officer going to believe that everything that was in the business plan is right.

So, I think that’s a shared… There are a lot of things that officers don’t agree on, but I think that’s a shared frustration among most consular officers. If the officer has to feel like they’re pulling information out of you then, they think that a third party or attorney did it and that you’re really not who you say you are if you can’t articulate what’s in within the application packet, especially the business plan, right? So, that’s definitely huge.

The other thing is like yes and no answers. I know there’s a lot of stuff on the Internet, circulating around that people say, “Oh, give short answers because then you’re not giving too much information to the officer.” I wholeheartedly disagree with that.

Anna Kerner Andersson: That’s frustrating to an officer because the officer has to spend the two to three minutes that they have to do this interview… Keep in mind for their own promotion, you know, the officer’s concerned about their own career. So, you want to make sure that you give the officer what they need to make the decision. They’ve got a number of cases that they have to get through in that day. If they don’t, they get passed over? for their promotion.

So, they’re trying to process the case as soon as they can, as fast as they can, and if they have to take an extra two to three minutes to figure out what’s going on because you keep saying yes, no, yes, no … You’re not giving longer answers to the officer the information they want from the question that they’re asking, that just gets frustrating for the officer and that can lead unfortunately to a denial just because they get tired of not getting the information that they want out of you.

That goes back to they need to justify the decision. If they can’t get the information out of you in one or two questions, it’s making it harder for the officer. So I think, generally speaking, yes and no questions are your own worst enemy. If you give yes or no question and answers and “in my opinion, and then, “’Yes, well it’s there,’ ‘I’m not sure what those numbers are but it was all in the stuff that my attorney put together for me…’” I mean, officers have this kind of love/ hate relationship with attorneys. With E2 visas most officers appreciate that an attorney went through and made sure that all the boxes are ticked, all the regulations are addressed and the cover letter is really important. For other visa classes I think that’s less the case and you want to make it about you. You don’t want to make it about the attorney that did the case for you or about anything else. You want to make the interview about you as the applicant and this is why you qualify. You need to be able to articulate that.

Angie Rupert:  Interesting. So I learned something today because I normally tell my clients to be very short with their answers … This is the deposition training, right? Like, “Don’t get into that,” “You do not want to go down a path you do not want to go down,” but maybe there’s a happy medium between the “…well I was going to do this except for that, my brother told me that I could start…” You know, that kind of answer where we’re like “off the path” or the yes/no because, I normally tell them “keep your answers are very, very short. They’ll ask you if they want to know more information.”  But, maybe there’s something in the middle there to keep short answers so they don’t have to keep asking yes or no questions. Are you trained though to not ask yes or no questions? It seems like they don’t even care if they ask or they just ask what they need to ask?

But yeah, there is the fine line. Absolutely, that’s the other thing that could get you into trouble. If you start talking about something that’s not relevant at all and not at all what the officer asked that also will get the officer frustrated. And again, going back to time: they’re very conscious about time. So, if you started going off in left field and giving the officer more information than what they need to know that’s also a problem. So, that’s what we think, as a former consular officer, that’s what I kind of think the value is. That I can help prepare applicants to kind of… You don’t want to sound too rehearsed and too practiced, but feel comfortable with making sure you get the right amount of information out without too much information but, also not enough information.

So yes, it is really…. There is a fine, you know, there is a specific sort of way about it and it takes practice. It’s an intimidating process. There is kind of that fine line that you don’t want to cross over in my opinion.

Angie Rupert:  Let me ask you that because you talked a little bit about you know… How many interviews… Now, London’s a very busy office, right? Toronto, Mexico City, Ciudad Juarez, Tokyo, there’s a variety. But let’s put yourself in a middle ground, let’s put yourself in like Oslo right? You’re not going to have hundreds a day, but how many interviews… Because maybe they don’t even… I’m not 100% sure that they have an E2 visa unit or someone that generally does that but, they would be obviously much less than London or Toronto or any other place. But, how many interviews would someone be expected to do in an E2 unit and then if you just were kind of taking everything like, how many interviews a day like – ballpark – does somebody need to do?

Anna Kerner Andersson: Yeah, if you’re in those smaller posts that maybe only have one or two consular officers, then you’re probably only doing maybe 60 to 100 or maybe even less than that a day.

Like, when I was Sierra Leone for a short exchange program that took me from Juarez during… They only had one consular officer and they had an influx of cases because of the DV lottery. So, they brought me in to help adjudicate and even with the two of us we only did probably less than 100 a day each. And that’ slow during peak season. So, if you’re in a really small place, you’re probably only doing you know 50 interviews a day if you’re in a really small a place that only has one or two officers.

Angie Rupert: And then in London what were you doing?

Anna Kerner Andersson: London, I thought was slow because I went to London after Juarez and in Juarez we did close to almost 500 a day. We were doing like 4…

Angie Rupert:  A piece? Per person?

Angie Rupert: Are there even 500 minutes in a workday?

Anna Kerner Andersson:  I think…Well that included visa waiver cases, too. So like the renewals because that border crossing card… so it’s a little bit different but yeah, it was crazy.

Angie Rupert: Oh my goodness, and Juarez takes paper. They don’t even have e-mail!

Anna Kerner Andersson: Yeah, it was it was terrible. I think, that’s changed they had more officers coming in because they were expecting immigration reform that was going to require more officers so, I think that might have changed.  But yes, that was crazy. So, London was more like around the 150 to 200 mark as what we were kind of expected to do. And that was tourist visas and third country nationals and everything, right?

So, if you were in the E2 visa unit sometimes you do E2 visas for the morning and then you would do regular visas in the afternoon. If there weren’t that many visas. But typically, if you were doing just E2´s for the day you might only get like 20, 25 visas.

Angie Rupert:  Quite a lot! That’s still a lot cause when you’ve got these applications, right? Because the applications are much more robust than an application for like an F1 or something. It’s kind of you know … with the E2 there’s a lot a variance, right?

Interesting! So everybody’s going to be responsible for about 100 interviews a day whether they’re E2´s or something else or a combination thereof or something. So, keeping that in mind obviously, bullet points, headlines, highlighted that kind of stuff that’s all very important.

We use cookies on our website to give you the most relevant experience by remembering your preferences and repeat visits. By clicking “Accept”, you consent to the use of ALL the cookies.
Cookie SettingsAccept
Manage consent

This website uses cookies to improve your experience while you navigate through the website. Out of these, the cookies that are categorized as necessary are stored on your browser as they are essential for the working of basic functionalities of the website. We also use third-party cookies that help us analyze and understand how you use this website. These cookies will be stored in your browser only with your consent. You also have the option to opt-out of these cookies. But opting out of some of these cookies may affect your browsing experience.
Necessary Always Enabled
Necessary cookies are absolutely essential for the website to function properly. These cookies ensure basic functionalities and security features of the website, anonymously.
Functional
Functional cookies help to perform certain functionalities like sharing the content of the website on social media platforms, collect feedbacks, and other third-party features.
Performance
Performance cookies are used to understand and analyze the key performance indexes of the website which helps in delivering a better user experience for the visitors.
Analytics
Analytical cookies are used to understand how visitors interact with the website. These cookies help provide information on metrics the number of visitors, bounce rate, traffic source, etc.
Advertisement
Advertisement cookies are used to provide visitors with relevant ads and marketing campaigns. These cookies track visitors across websites and collect information to provide customized ads.
Others
Other uncategorized cookies are those that are being analyzed and have not been classified into a category as yet.
SAVE & ACCEPT
× WhatsApp +1 (323) 434-4385