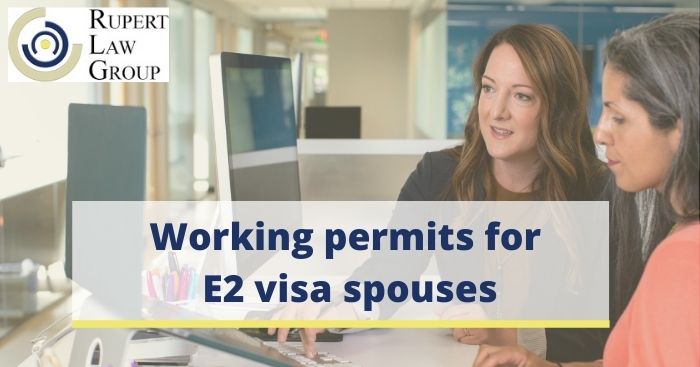 One of the most frequent questions I get from clients is about whether E2 visa spouses can get working permits. The short answer – yes!

Once a person gets an E2 visa, whether as an investor or as an employee, the person’s spouse is eligible for a working permit. The permit, called an Employment Authorization Document (commonly abbreviated as an “EAD”), is issued through USCIS. This is a completely separate process from the E2 visa.

Does my E2 visa spouse need a working permit in order to work in the U.S.?

Yes. Your spouse will need a working permit in order to work with authorization in the United States.

That said, there is some case law to say that the E2 visa spouse doesn’t necessarily need a work permit. Without getting into the details of the legal system, I’ll just say that this case law doesn’t necessarily set precedent for USCIS.  This means that many officers in the Department of State (the government entity that issues visas) and the Department of Homeland security (the government entity that issues working permits) likely won’t honor this case law.   As a result, to avoid future hassles and potential denials based on unauthorized work by your spouse, your E2 visa spouse definitely needs a working permit.

How does my spouse apply for a working permit?

The process to get employment authorization is fairly straightforward.

Applying after approval at a U.S. consulate/embassy

Applying after approval by USCIS

If you and your spouse petitioned for E2 status with USCIS, meaning, you came to the U.S. as a non-immigrant (usually B1/B2) and then changed your status to E2 without leaving the U.S., he/she must wait for E2 status approval first.  Upon E2 status approval, your spouse will fill out the I-765.  From there, the process is the same as with those who applied at the consulate or embassy – your spouse will wait for about three to five months to get approval in the mail. (Of course, approval is never guaranteed.)  Once your spouse gets a working permit, he/she will be able to accept a job in the United States.

Where can my E2 visa spouse work after working permit approval?

Your spouse can work anywhere he/she can get a job. In addition, he/she can work for your E2 business or he/she can start a new business and be self-employed. The possibilities are endless, and no separate sponsor is needed for your spouse in order to accept employment.

Can my spouse get a social security card?

As a result of the flexibility of this separate working permit, many E2 investors include this as part of the immigration strategy. Some potential E2 investors who contact me eventually have the spouse apply for the E2 visa and then become the E2 spouse in order to work elsewhere. In addition, some E2 visa investors have plans to start two or more businesses in the United States. Because the E2 investor will only be eligible to work within the business for which he/she was originally approved, the E2 spouse will sometimes open and operate the additional businesses in the United States.

A wise E2 investor will speak with an E2 visa lawyer about how to take advantage of the flexibility of the investor’s spouse’s work eligibility.

Can my E2 visa children get a working permit?

No. Children in the United States on the E2 visa or in E2 status are not eligible to work. They are, of course, eligible to attend school.

Do I need a separate working permit in order to work at my E2 business?

No. Once you have the visa or the approval, the E2 visa investor doesn’t need a separate working permit. The visa or approval notice is enough to legally work in the U.S.